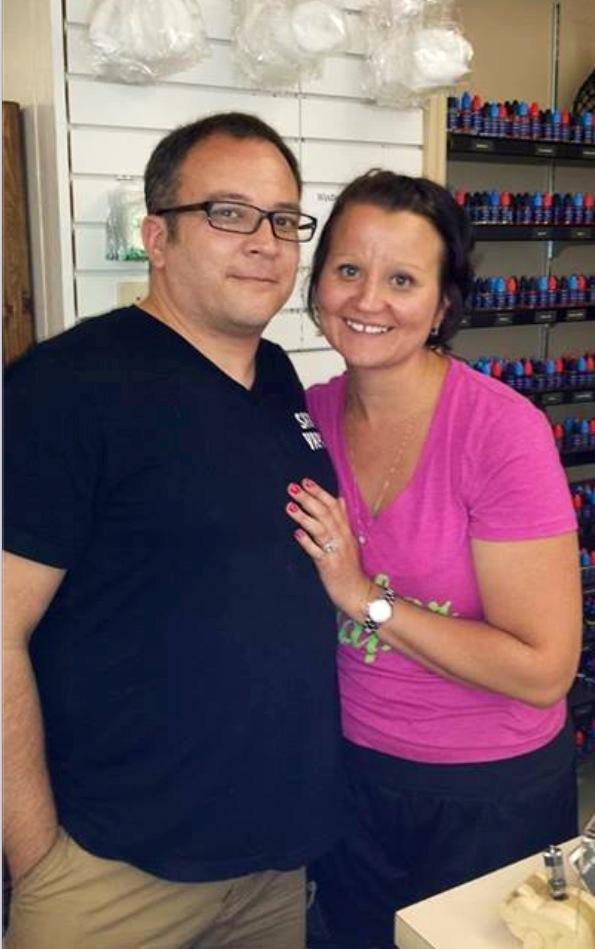 Our story starts over 20 years ago when we both started smoking at a young age, like many people, it was cool, our friends were doing it and we thought we really liked it, we were making an adult decision when we finally became old enough to buy our own…And it was the “norm”.

Like many people we both strongly believed that we could just quit smoking whenever we wanted to.
We thought that we could try quitting cold turkey when we were ready, we thought we could have self-control and quit without any problems.

We realized over the past 4 yrs. that this was not an option for us but we were both determined to continue to try to quit together and support each other with any available options: a strong support system, exercise, keeping ourselves busy at work and at home, chewing gum, a nicotine patch system, and medications available if we found out that the addiction, the want, need and desire was stronger than we thought.

We enjoy the social aspect, the mental breaks at work and home and came to the conclusion that it was not an easy habit to quit. We needed the hand mouth fetish, the nicotine, and the one vice that we found enjoyment from on a daily basis.

What we didn’t like was the smell, the taste, and the change in how it was no longer socially acceptable and became more inconvenient and inconvenienced those around us. We had to hide our filthy habit, try soaps, lotions, mints, and air fresheners to cover it up from not only friends & family but convince ourselves that we & our surroundings didn’t smell like cigarettes.

We understand it is harmful to our health, and were exposing our friends, family, coworkers and even complete strangers to our poor choices. When you smoke you understand the health risks, and although it’s not that you don’t care, it’s just that we find a way to defend our choice, it’s our choice!

We were introduced to the cigarette looking electronic cigarette 4 years ago at the beginning our quest to quit. We tried and were not satisfied with what was the “new”. It made us sick in the stomach, gave us sore throats, and limited our use after so many puffs. It was frustrating, and lead us back to just going to buy a pack…Even after investing a couple hundred dollars twice, we didn’t stick with it.

So you may be thinking why now… what’s so different this time and how do we know that we won’t go back to our old ways???
That’s fair!

When we first learned about this option we were again smoking and weren’t looking for another option. We were again content that the previous options didn’t work and nothing else would replace the “real thing”. We learned about this alternative of an electronic vaporizer through our oldest daughter and her fiancé who explained how this was the “new thing” and still we weren’t interested in trying to quit again. We did some research and Ismael was sold, a week later he was walking around puffing on this thing and insisted on me trying it for myself. He used it on and off for a couple of months while he weened himself from cigarettes and was convinced it would work for the both of us. I wasn’t sold and still wasn’t ready.

Then it happened…the time came where I ran out of cigarettes, would’ve had to run out late at night to buy more and I submitted,  I needed my “fix”, I figured it’s worth a shot, what could it hurt and guess what … I was sold…it worked! I have honestly never looked back. We used it every day, tried new flavors after the taste of tobacco was no longer appealing to us…
I can only try to explain what a difference this has made in our lives,
It really worked!

We knew at that point we had to share this product with everyone we know, and do everything to make it an available for others.
We won’t be pushy, tell lies, or pray on the last dollar to your name for our financial benefit. You have to want it. It’s not a miracle. It still takes self-control and patience.  It’s worth a shot, it’s enjoyable and  its way less expensive!
We want to be an inspiration to others.
This is our testimony based on our personal experience.

With all that being said, we must say this product is NOT A CESSATION DEVICE, this is an alternative method. We have used it to quit but that does not mean that is the sole purpose of the devices that we sell. The FDA has not approved the use of e-cigarettes or electronic vaporizers as a tool to quit smoking.